The University of Marburg is situated in the town of Marburg. On the way from the airport at Frankfurt, the first image of the town that I’m greeted with is a picturesque image of an ancient castle situated above the town. The town itself is composed primarily of narrow streets and alleys, the streets are lined by a mixture of old and modern buildings. Through the town runs the river Lahn, the cafeteria and student union is situated right next to the river with a series of steps that lead down to the river itself. The river is perpetually populated by a flock of ducks and a pair of swans.

The university is a mixture of new and old, some buildings are clearly new, modern construction. But there are other structures that are clearly aged and weathered. The buildings are somewhat spread out, nothing like the highly centralized campus that we UTD students have gotten used to: some courses are held up on the same hill as the castle, others are across the river and through a tunnel beneath a highway.

What I mean to say with all of this is: it’s different. You’re taught differently, you learn differently, you experience something new and different. You at first feel confined, perhaps: you don’t have a car, but then you learn the public transit system and feel more free than ever. If you miss city life: you can simply take the train to Frankfurt when your classes end for the day, doing your studies on the train and then eating lunch or dinner in Frankfurt. You don’t need a car, you can take public transit, and everything is in walking distance from the stop. There’s no need to think about parking, or sitting in traffic.

You’re given much more freedom as a student as well. The bulk of my courses were composed of lectures, with little coursework to follow along with them, the grade was to be determined entirely by an examination at the end of the semester. Easy for some, quite a bit more terrorizing for me. Beyond the course material itself, having to figure out how to study and learn under that system felt like one of the most valuable things I’ve picked up.

Your classes are more diverse as well. Courses in the United States are heavily composed of Americans, we share similar worldviews and experiences by dint of having lived in the same country, but in Marburg, it’s different. I had classmates from Kosovo, Macau, France, Italy, and of course Germany, instead of being surrounded by Americans, I routinely found myself being the only one. Being exposed to different viewpoints like that is an extraordinarily valuable experience, especially for an IPE major.

It’s different, and that fundamentally is the most important and valuable thing about studying abroad like this. It shakes us from our complacency and brings into view just how much more there is to discover and learn. Instead of merely studying it from afar and knowing in some vague sense that a different place feels different, going there, living, studying, and experiencing that place puts it into perspective all the big and little things that change, and how that affects people and how it can affect us. 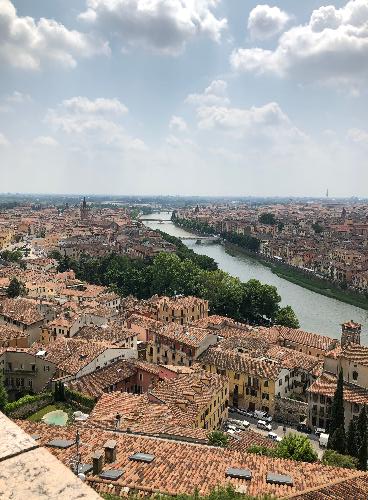 What started off as a joke with a friend about eating gelato and pasta everyday soon became an attainable reality as we started a six-week study abroad in Verona, Italy.

As the plane landed at the Frankfurt Airport, I was brimming with excitement. The longest of my flights was now over, and within a few short hours, I’d be in Italy, eating delicious food, exploring cities with centuries of history, and immersing myself in a new and welcoming culture. NOTHING could bring me down.

As we were loaded onto the buses that would take us from the plane to the airport terminal, my friend and I were separated from the rest of the group who managed to get on an earlier wave of buses. A bit irksome, but we’ll just meet back up with them at the gate before the next flight. After several minutes of walking and asking for directions, we finally made it to Customs and Immigration. Just as we were able to finally inch up to the front of the line, the booth closed, and we were directed to join another line instead. Annoying, but we probably still have enough time to make it to the next flight, right? Once we got through customs, we speed-walked our way to security, our group still nowhere in sight. The line moved at a snail’s pace, and as more and more time ticked by, my anxiety continued to build. We were quickly running out of time, and the people in front of us decided to argue with the security personnel about what they had to remove from their bags. Finally through, we sprinted to our gate and between gasping breaths asked whether our flight was still boarding. It was not. We missed it.

Dread set in. While the rest of our group had made it, we were stuck in a foreign airport with no flight and no international phone plan. We were on our own. The worker at the gate could not help us book another flight and instead directed us to the Lufthansa help desk, who also could not help us because of a technicality and instead directed us to the United help desk which was outside of security. Thankfully, they were able to help and arranged for us to get on a later flight to Verona.

After once again going through security and finding the new gate, we could finally sit down and let out a sigh of relief. And yet, a part of me remained worried. After all, if this whole mess could happen within less than 24 hours since I’d left the US, how much more could go wrong in the upcoming six weeks? My confidence faltered for a moment before bolstering again. Perhaps more things would end up going wrong on the trip, but so what? I got through and handled this, and when the next issue comes, I will get through and handle that too.

Now, whenever I’m faced with challenges and unpleasant surprises, I think about my study abroad experience. I think about rebooking a flight in foreign country, about using a combination of charades and offline Google Translate to buy bus tickets, about navigating the maze of canals and alleys of Venice with nothing but a buggy, downloaded map. And I realize: there really is nothing that can bring me down.